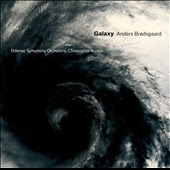 Modern Danish composers? DaCapo brings us a bird's-eye view of some of what goes on there, as you may have noticed from previous posts on this blog.

Today, another very interesting release, Galaxy (DaCapo 8.226551), focusing on the orchestral music of Anders Brodsgaard (b. 1955). First things first: Christopher Austin and the Odense Symphony Orchestra illuminate the two works covered with bold definition and verve. The sound is quite good as well.

The two works? "Galaxy," (composed between 1990-1999), and "Monk's Mixtures" (2009). The former matches a large orchestra with an expansive, continuous sonic matrix. It is in turn consonant, dissonant, relatively quiescent or boldly dynamic. The sound universe suggests an isomorphic relation to the nearly infinite yet complexly patterned logic of a galaxy in motion. It is a finely nuanced, deeply expressive work that never seems less than inspired. His use of the orchestra shows a complete mastery of the sound-producing resources available to him, though he mostly realizes his ever-shifting sound masses without recourse to the less conventional sound-producing techniques developed by composers like Xenakis and Penderecki in their breakthrough works. Yet the overall effect is singular.

In the end one gets a sense of Brodsgaard the composer; a musical mind that is as attuned to orchestral color as it is inventively original in a melodic-harmonic sense.

This is bracing music, a jump into a cold stream. It's a good thing to hear. It gives you an open window into Brodsgaard's universe of sound. Recommended.
Posted by Grego Applegate Edwards at 4:30 AM