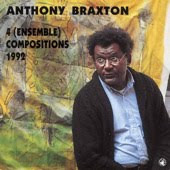 Anthony Braxton has been so prolific over the years that I have been guilty of not keeping up with it. So especially his music of the '90s for me, partially because that was a decade where I was so absorbed in trying to make a living that much fell by the wayside.

Realizing this I searched out some of Braxton's music from that period, one being his Black Saint release Four Ensemble Compositions, 1992. Now I know some people find his classical-improvisational pieces perplexing or difficult. I think that usually that has to do with the need to hear the music a number of times. The four compositions on this recording, for example, do not yield their charms to the listener the first time around, at least not all of them.

Once you hear them three, four, five times, you start getting inside them. That is, if you have developed the close listening concentration that's necessary to appreciate all such pieces.

At any rate, I found the Four Ensemble Compositions to be some remarkable music. They combine the expressivity of avant garde improvisation a la Braxton with the kaleidoscopic play of sound colors that composed modern ensemble music offers. To me what's especially good about these pieces is how, by this point, Mr. Braxton has mastered an idiom that allows both approaches to meet on common ground. The result is not pastiche. It is pure Braxton.

Highly recommended. . .
Posted by Grego Applegate Edwards at 4:56 AM