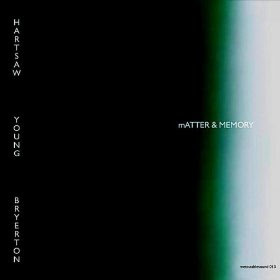 Paul Hartsaw, Chicago avant tenor and soprano, has been making very interesting music, quietly but definitively. We've covered several of them on these pages (see below) and continue today with a trio recording he made with bassist Andrew Young and percussionist Jerome Bryerton. Matter and Memory (metastablesound 013) is dedicated to the philosopher Henri Bergson. That seems fitting because the music consistently flourishes on abstracted, conceptual grounds. It's available as a download-only album from the usual sources (Amazon, i tunes, Napster, etc.)

It was recorded in 2007 and released this year. Like the Spontaneous Music Ensemble and others before them, they construct timbrally exploratory sonic worlds that envelope the listener with ever-changing densities, freely presented. All three players meld into one as they find means of expression that avoid the obvious combinations and rhythmic regularities to create a more "meta"-oriented approach. And so of course the name of the label for this release (metastable sound) seems as much descriptive and emblematic.

Each player contributes a thoroughgoingly original musical personality on these improvisations. They are deliberative in a high modernist realm; there are no mis-steps or quotations from the vernacular. This is very well-executed, rather pure music of the modern age. And it's really quite good. Don't plan to unleash it at your next dance party. It's not a music of overt pulsation. Or perhaps you SHOULD, if you have friends who have a sense of adventure. Nevertheless, this tends to be more contemplative than visceral, though generalities can be misleading, since Matter and Memory does have a highly expressive component.

Give this one a listen. It's good for your ears.
Posted by Grego Applegate Edwards at 4:56 AM