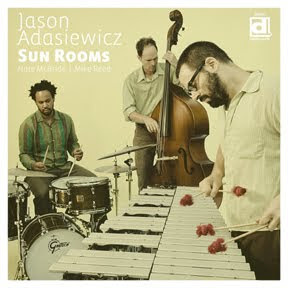 Chicago vibist Jason Adasiewicz has been making important contributions to some landmark record dates in the past several years. His work with the Lucky ‘7s comes to mind, among others.

Now he makes his debut as a leader on Sun Rooms (Delmark 593). It’s a nicely manned trio with Jason plus Nate McBride on bass and Mike Reed on the drums, both of the latter important participants in the latest wave of great Chicagoland modern jazzmaking.

Adasiewicz in larger ensembles (at least on records) tends to excel at the staccato jab phrases that come out of the lineage of Bobby Hutcherson, though Jason has his own musical sensibility. In a smaller group such as this one, unencumbered by the need to accommodate one or more solo voices, he stretches out his phrasing and allows the vibes to ring a little bit more than he might do in a larger ensemble. In that sense the great Walt Dickerson comes to mind, if only as a referent. The music sometimes tends toward the contemplative side, with some wonderfully laid back neo-balladic playing. But there are also numbers that have forward-moving momentum and plenty of energy in reserve.

There are some excellent originals here plus an affectionate, legato look at Ellington’s lyrical "Warm Valley". Everyone is on his “A” Game, not the least Mr. Adasiewicz. Sun Rooms is a superb outing and probably the vibes album of the year. It is chamber jazz at its finest.
Posted by Grego Applegate Edwards at 5:29 AM