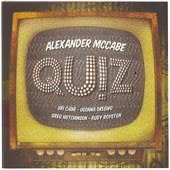 Hey, Alexander McCabe puts together some smoking nu-bop on his album Quiz (CAP 1023). It's McCabe on alto with a highly capable group of Uri Caine on piano, Ugonna Okegwo, bass, and either Greg Hutchinson or Rudy Royston on the drums. They burn through five McCabe originals and two standards. The material is played with plenty of fire. McCabe has the Bird-McLean-Woods-Cannonball lineage at his heels and he shows that he's mastered the searing virtuosity associated with such masters, and brought his own personality into the equation as well. Uri Caine makes for a strong second soloist, as you can imagine, and the band is swinging right where they should be throughout.

Everybody does a beautiful job. And it gives notice that Alexander McCabe is a heavyweight!
Posted by Grego Applegate Edwards at 4:52 AM