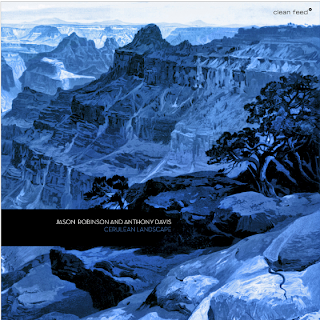 Cerulian Landscape (Clean Feed 198) is one beautiful recording. Lyricism is not a common thing in jazz-improv these days. Lyricism is bursting at the seams on this Jason Robinson and Anthony Davis release. It serves notice in several ways. One, Anthony Davis is a jazz composer and pianist of the highest stature. I won't say he's back, because I don't believe he's ever left the scene. But this CD should wake people up to his artistry if they have not paid enough attention to him. Secondly, it highlights the formidable compositional skills of Jason Robinson, and also puts the lyrical side of his work on tenor, soprano, alto and alto flute in bold relief. Now he also happens to have two other new releases we'll be covering on this blog in the near future. All three together show a remarkably versatile musician. But that will become more clear in the coming weeks.

So of the seven songs on this disk, three are by Davis, three are by Robinson (there is also one by Jason Sherbundy). There are moments of free-fire but they have such strong melodic projection in them that I would have to say that there's a kind of lyricism going there too. Two very strong players in full flight; some very beautiful pieces....what more could you want? Ravishing! Really ravishing music.
Posted by Grego Applegate Edwards at 4:55 AM