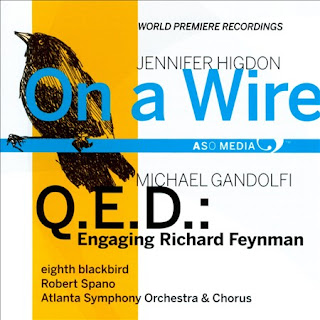 A number of years ago one of my local classical radio stations ran a syndicated show that presented live concert recordings of modern American classical compositions. These were generally of works not yet available on commercial releases. The quality of the presentations and the performances themselves were always of a high standard. One of the ensembles most frequently featured was the Atlanta Symphony, then under the late Robert Shaw. At that point and a bit later when I and my writing team covered the ASO concert season for the monthly Delta Airlines publication MDG Atlanta, I realized that the ASO had evolved into one of America's great orchestras, with adventurous programming and a genuine commitment to the performance of new works.

So when I found out that the ASO had formed their own label dedicated to the presentation of such new works, I jumped eagerly at the chance to get a review copy of release number one. ASO Media CD 1001 reaffirms what I already know: that the Atlanta Symphony Orchestra, now under the very capable direction of Robert Spano, is an organization that excels in well-nuanced performances of modern works. For this recording the acclaimed chamber sextet Eight Blackbirds is an important part of the proceedings.

"On A Wire" is a very evocative and lively piece, featuring wonderful, colorful concerto writing for six soloists: winds, violin/viola, cello, piano and marimba. It is a work that has at times an almost eastern flavor, with muted and bowed piano almost koto-like, marimba passage work adding to that flavor, but also with a great variety of imaginatively orchestrated elements entering into the overall scheme. It engages virtuosic brilliance-subtlety in a six-way give and take, along with the traditional soloists-versus-full-orchestra dialog. However Ms. Higdon most definitely makes her own way within the concerto form. The work is delightful; the performance excitingly bracing.

"Q.E.D." has a very nicely contrasting presence on the disk. It is Michael Gandolfi's meditation on the beloved late physicist Richard Feynman's BBC talk on quantum electrodynamics, the latter given in vivid form to illuminate the intricacies of the body of knowledge in ways comprehensible to the layman. The dialogic text is set to music for the very engaged ASO Chorus. A rather full orchestra surrounds, reinforces, and provides musical commentary and contrast to the choral parts. The music is quite tonal and at times (perhaps this is just a personal listening quirk on my part) reminds me of Vaughan William's "Sea Symphony" and Hindemith's "When Lilacs Last in the Dooryard Bloom'd." Now these happen to be two of my favorite "modern" works for orchestra and chorus. (And interestingly, the Hindemith piece was commissioned by Robert Shaw, so there is a connection somehow!) The main point though is that, like those two masterpieces, the amassed sounds of full orchestra and chorus are used selectively and inventively by Maestro Gandolfi to create a many-faceted expressive matrix. It is a moving work, sonorously rapturous.

In short the first ASO Media release is a knockout. Those who want to be exposed to some captivating modern American classical music would do well to savor this one.
Posted by Grego Applegate Edwards at 4:53 AM