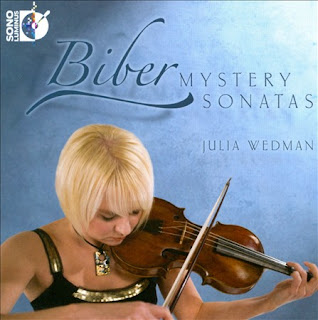 When I was first coming of age as a classical music listener I had the good fortune to stumble upon a three-record Voxbox recording of the Mystery (or Rosary) Sonatas by Heinrich Ignaz Franz von Biber (1644-1704). It opened another world to me. Susanne Lautenbacher was the violin soloist. The continuo of organ or harpsichord plus cello reinforced the exotic sound of the scordatura (non-standard tuning) violin. As I continued to expand my listening to a fuller spectrum of music from the Baroque era I came to realize that Biber's work virtually stood alone in the repertoire, in that though it followed the more or less typical part writing of the era, the overall sound of the music had an otherworldly aura fitting to the Mystery theme. There are sometimes drones (on the organ), a savoring of the intervalic relationships of the various instruments and a revelling in ensemble color that looked back at times to earlier Renaissance and Medieval forms as it adapted the sound to the more sophisticated long-form developments of Biber's era.

The violin part was movingly beautiful; the various sonatas contrasted in mood; and the mystical aspects of the music introduced a hard-to-define element I had experienced listening to the Indian classical music of Ravi Shankar that was so much a part of the world I was in then. (I also got that feeling in a slightly different way when listening to Bach's St. Matthew Passion, but that's a story for another day.)

I later found much to appreciate and similarities in sound when I started listening to some of the viola da gamba repertoire from the era, thanks especially to the original instrument performance practice movement that began to be widely recorded in the '70s. But the Biber sonatas still had a special place in my musical mind. Many years later I do not feel differently. I still have the Voxbox set I bought for $4.99 back then. I know where every skip will occur. I've internalized the music the way Lautenbacher and her colleagues put it forward.

The beauty of the recorded era is that every recorded version of a work is preserved for us as a slice of frozen time. When newer versions come along we can more clearly grasp the details of difference as well as the larger picture.

This long preamble, then, leads us to the topic at hand. Namely Julia Wedman's new recording of Biber's sonatas (Sono Luminous 92127, 2-CDs). The first thing that strikes one is the more sonorous continuo. Charlotte Nediger's organ and harpsichord are front-and-center as one expects. But then there is Felix Deak on the cello and on the more resonant viola da gamba, Lucas Harris on the theorbo and archlute, and Julia Seager Scon on harp. All this results in a more richly spacious sonance and an even more exotic feel to the music, helped along by state-of-the-art sound-stage imaging. It gives Biber's sonatas an even deeper mystique, something that the Voxbox didn't capture quite as fully. Then there is Julia Wedman as the violin soloist. She is unsentimentally tender in the largo passages, and she gets a fire of brilliance blazing on the more intricate virtuoso passages. She does a remarkable job projecting some of the passionate abandon AND the mystically meditative moments of the solo part. She is a marvel here.

So after 40 years of the Lautenbacher Voxbox, I am happy to supplement my listening with (one hopes) another 40 years. . . with the Wedman version living alongside the Lautenbacher version. There is no question in my mind that Julia Wedman's version is the new standard by which other versions should be judged. It is the one to get for someone not familiar with Biber's wondrous music. My only trouble is that I instinctively rise from my seat to push the stylus forward when I come to the parts that skip on the Voxbox. Only. . . no skips!
Posted by Grego Applegate Edwards at 4:30 AM