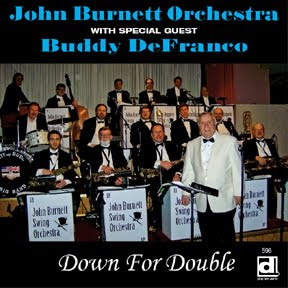 John Burnett's Orchestra (big band) has been holding forth in and around Chicago for a number of years. Their new, third album Down For Double (Delmark 596) comes out of two live and one studio session from 2000 through 2010. It's subtitled "Saluting the Best Bandleaders of Swing" and that's what it does. That doesn't mean that every important bandleader is represented, but Miller, Duke, Count, Goodman, Rich, Krupa and Slide Hampton (?) are each honored by one or more of their best-known charts. The last three cuts (and chronologically the first session) brings in clarinet powerhouse Buddy DeFranco. Otherwise, the soloists do their best but it's really about the ensemble giving the chestnuts the full sound that the early 78s lacked.

Not everything on this CD is in the realm of institutionally bonafide classics. "Cottontail," yes, but also Buddy Rich's "West Side Story" suite; "In the Mood." but also Slide Hampton's "The Blues."

Everything has the sparkle of a well-drilled and pretty polished unit. This no doubt is a band especially to appreciate live. If they don't really seem to be contributing much beyond the revival stage, it has to be understood that their objective is not to be "the new big band," but more "the revival band," much as, let's say, a doo-wop revival group is not expected to carve new territory in that genre.

They sound lively and they swing. What they do is what they do! Put me in a club with John Burnett holding forth, give me a drink or two and I'll be having a good time.
Posted by Grego Applegate Edwards at 4:50 AM