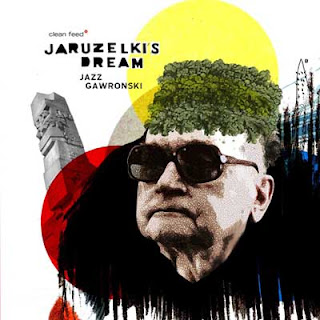 A free alto-bass-drums trio comes out of a Venice-ian studio with Jaruzelski's Dream (Clean Feed 211). And what is the result? A long, most energetic set of improvisations with rock, swing and freetime flow. Franceso Cusa makes an impact with his energy drumming. Stefano Senni plies his bass with a sure sense of phrase and form. Piero Bittolo Bon often falls into repetitive phrases played with heat. That's what it is about. Mr. Bon's alto has insistency, consistency and focused variational persistency. It is his sense of structure that structures the freedom.

Now how he does that may lead some people to search for the emergency fire exit. But I suspect those sorts of people would not care for this music in any event.

It is singular, determined and overt in its overall thrust. It burns the candle at both ends and everywhere in the middle. It worries and exhausts melodic phrases and then just as willfully abandons them to move on to something new. And that's what saves the music from itself, as it were. It harps on something and then moves on, never overstaying its welcome like an overly emphatic conversatonalist at a cocktail clatch. Bon makes his point emphatically and moves on to the next station of party goers before he makes himself a bore. That's good.

This is music of interest. It is not typical of the free things out there right now. And it is controversial in how it goes about its freedom. Hey, why not shake things up a bit?
Posted by Grego Applegate Edwards at 4:38 AM