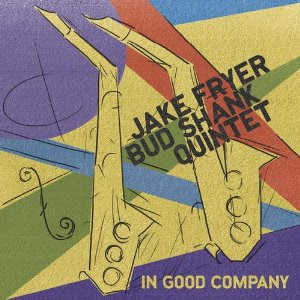 If there is still a west coast kind of jazz it's because players associated with the west coast still play music. That's obvious, of course, but even in its heyday the west coast style covered a broad group of stylistic tendencies, from the cool of a Chet Baker to the heat of Hamp Hawes. Bud Shank leaned toward the cooler alto style in his first years, making some marvelous records. Sometime in the '70s his style changed and he began heating it up. He changed his sound.

Shoot forward to April 1st, 2009. Upcoming altoist Jake Fryer has convinced Bud to get together as a two-alto team and do a session populated by some of the very best rhythm men--Mike Wofford on piano, an intelligent swinger who had a productive tenure in Shelly Manne's last bands, Bob Magnusson on bass, a stalwart, and Joe LaBarbera on drums, who will of course always be remembered for his work with Bill Evans' final group, though he's gone on to many other productive associations.

So you put all these heavy cats in the studio and they approach the session like a gig--with the accent on blowing, communication, spirit. The result is In Good Company (Capri 74103-2). As the liner notes spell out for us, if it were your last day on earth and you were Bud Shank, what better way to spend it than jamming with some heavy cats?

The recorded evidence shows that Bud was flowing with good ideas and Jake Fryer was inspired to lock horns with him in congenial collegiality. They both play well. Bud's tone by then is half-way between Bird's pre-Camarillo "Gypsy", early Ornette, and, surprisingly enough, Pete Brown, for those that remember him. And that's to say that there is painfully soulful expression in the tone, a lot of feeling. Mike Wofford sounds beautiful here too and Magnusson and LaBarbera do their swinging best. Three standards and some bopping Fryer originals make up the song list.

It's a document of the last solos, a final chapter in the legacy of Bud Shank's long career. But it also introduces Jake Fryer to us, who sounds like he might be going places. And it's good, solid mainstream jazz.
Posted by Grego Applegate Edwards at 4:35 AM