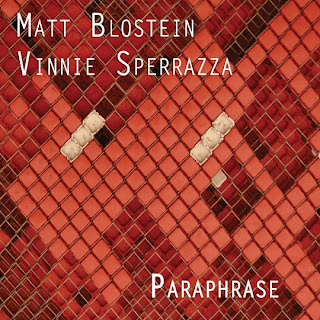 Music changes over time. What was mainstream in jazz circa 1965 is more retro now, 46 years later. So Al Cohn and Zoot Sims are long gone, their music still great, but people coming up with that take on the jazz sound are really not mainstream anymore; they are revivalists.

So what then IS mainstream? Perhaps some of the things Dave Holland has been doing form one part of it. There's a looseness that isn't quite "free" in the definition of the music by that name. It has a swinging or rocking pulse, it features soloists more or less out of a post-Trane sensibility, the songs have unifying ostinatos, tonally centered themes that embrace bop and what came after, and they break up the ensemble into varying combinations in ways that Zoot and Al didn't normally deem fit.

The Matt Blostein-Vinnie Sperrazza Quartet and their second CD Paraphrase (Yeah-Yeah 0006) is mainstream in this way, partially, it seems to me. There are strong soloists in Mr. Blostein and his alto, and Jacob Garchik and his trombone; strong anchorage from Geoff Kraly on electric bass; and well executed swinging drumming from co-leader Vinnie Sperrazza.

What's more the two leaders provide compositional material that has weight, is much more involved than the series of head arrangements that mainstream was mostly about in 1965. There are interesting written interludes before, during and after the soloing. And some of the soloing is related thematically to the compositional passagework in ways that go beyond "playing the changes."

All that is fine, you might think, but what about Paraphrase taken on its own. How does it stand up? Very well. Just because I can elaborate on the various traits that put it into a "new mainstream" development does not imply that the music is generic. It is not. In fact the quartet would seem to be well on the way to defining itself as a singular example within the space it operates. Both the lack of a piano or other chording instrument and the treatment of the routines leaves plenty of room for each individual to develop his solo style and the collective sound of the band as well.

They do that and do it well. If fact the CD is excellent, no matter what category you would care to invoke. This is first-rate music, as worthy a second album as I've heard from a young group in the last several years. Get it and you'll be getting something to give your ears much pleasure and your mind much to ponder.
Posted by Grego Applegate Edwards at 4:38 AM