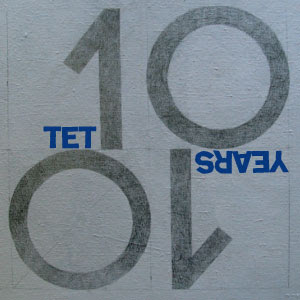 Peter Brotzmann's Chicago Tentet combines some of the finest avant improvisers from the Chicago area (and the USA in general) with a select crew of European out virtuosi. The Chicago Tentet has been a kind of smaller outside big band that continues to thrive (they are touring Europe this April) through the over-the-top excellence of its members and the well-executed routines that keep textural variety and energy levels high.

In 2007 the Tentet appeared at Molde. The recording of that performance came out a few years ago appropriately titled 10 Years: The Chicago Tentet at Molde (Okkadisk 12072), in honor of their 10th anniversary. The all-star cast included Brotzmann, McPhee, Kessler, Johannes Bauer, Vandermark, and Nilssen-Love, among the others.

What this album represents is a typical outing for the group, which means that it has a dynamic thrust and full-out capability that is matched by few bands of its type. For contrast and dramatic sequencing they wisely choose their moments to evoke the band in full-blastoff mode, taking the time to explore various instrumental combinations and textures along the way.

10 Years gives you an excellent example of the band at a peak. It's a must-have for any serious student of modern "free" improvisation.
Posted by Grego Applegate Edwards at 4:38 AM