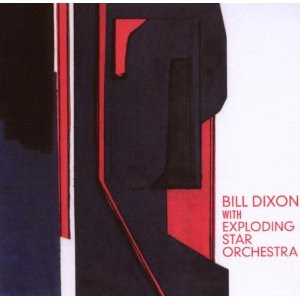 The great Bill Dixon is gone. I am late at putting my hand at a fitting memorial line or two. This is all I think I need to say: Bill Dixon never sounded like anybody else on trumpet and he never wrote a line that didn't have his indelible stylistic footprint squarely emblazoned upon it.

So we turn to one of his last recordings, Bill Dixon with Exploding Star Orchestra (Thrill Jockey 192). As I nabbed this as a download I as per the usual received the music with absolutely no information about it, which is fine for the pop hits of the day but terribly insulting to the artists who do creative music. So here is what I managed to gather about the music after that fact of downloading. It's a collaboration of Bill and Rob Mazurek's Exploding Star Orchestra, quite obviously. And it was recorded in 2008. It seems as if Mazurek was responsible for the compositions but even that wasn't clear on the key sites that had to do with promoting this release. I've gotten to know the Exploding Star through later recordings and it is a beautifully advanced large outfit with many of the leading lights of Chicago's new jazz, but I was unable to find a personel listing for this recording. No matter.

What's important is that the music is quite wonderful. Exploding Star is a fine free orchestra, the music is adventuresome and Bill Dixon plays every note with deliberation and personal conviction. I believe I read a review a while ago where the writer complained that he sounded like he was aging and tired. I think he sounds like Bill Dixon in his last years. I'd rather hear him in that stage of his career than 100 of today's players at the peak of their physical ability. Like the late paintings of Picasso or DeKooning, it is a last statement filled with meaning.
Posted by Grego Applegate Edwards at 7:42 AM