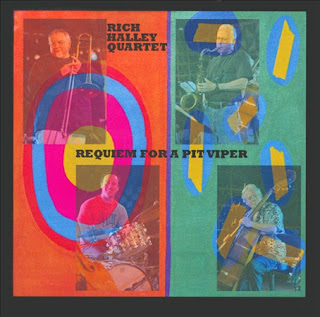 Tenorist-band- leader-tunesmith Rich Halley turns in one his very best efforts on the new CD Requiem for A Pit Viper (Pine Eagle 003). It's Rich plus trombonist Michael Vlatkovich, bassist Chris Reed and drummer Carson Halley in a long set of originals with lots of room for solos. As is generally the case with Rich's band concept there is a distinct post-Ornettian vibe. The pianoless group generally keeps the time going and freeboppingly rides atop in their own way--calling on a tradition that looks back to some of Sonny Simmons's (and Prince Lasha's) classic groups. In other words Rich and Michael play themselves with linear thrust; the rhythm section play themselves within the loose swing and rocktime of the genre.

Halley's son Carson puts a good showing together and moves the group along with dialogic use of the full drum kit; bassist Clyde Reed has a big Hadenesque sound and he walks with power. Michael's trombone works well with Richard's tenor, both showing the inventive fire and freedom that position them as some of the West Coast's most important free-avant figures active today.

Requiem has it all happening. This is a good one to grab as an intro to Rich Halley's music.
Posted by Grego Applegate Edwards at 5:23 AM