Roy Haynes and his "Roy-alty": The Elder Statesman of Jazz Looks Back...and Ahead 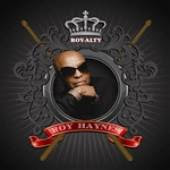 Roy. . . Haynes. I hear in my mind Sarah Vaughan saying that on an old LP, setting up a gem of a short Roy solo. He's been at the forefront of jazz so long it makes the head whirl. Important to Bebop from the late '40s and a force for what came after, whether with Trane, Gary Burton, Alice Coltrane, Pat Metheny (and too many more to name), or one of his many groups. And of course it's not just that he was there. As a drummer he is in the small handful of the truly great. His snap-crackle-pop. His whipsaw ride cymbal. The independence and rhythmical smarts of his bass drum and hi hat. The way he tunes his drums and makes them SOUND...sheeoot dude, he was there and influenced every drummer that came after. I mean that.

And here he is today with the new CD Roy-alty (Dreyfus Jazz). He still sounds as great as ever. He covers the music from the last 63 YEARS that he has been associated with...and still looks ahead.

The players? There is his Fountain of Youth band--Jaleel Shaw (alto), Martin Bejerano (piano), David Wang (acoustic bass) and they sound fine. Then there are the guest appearances: Chick Corea, Roy Hargrove, Stan Strickland, and others.

It's a summing up but not a farewell. And it has a kind of monumental heft to it, like a statue being erected of him playing a rim shot. What it is is a kind of memoir in music from a titan. But this is NOT the Titanic. He is floating still. May he go 63 years more.
Posted by Grego Applegate Edwards at 7:01 AM