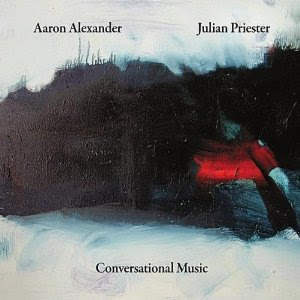 First things first. If you do not know who Julian Priester is (and I of course assume that most readers are very familiar with him) you have missed a very important part of what makes the trombone a central instrument in jazz today. From Max Roach's and Sun Ra's bands in the fifties, Herbie Hancock's Mwandishi in the early '70s, and through to today, he has been a major stylist. The good news is that he sounds great today, especially on the disk at hand, a program of duets with drummer Aaron Alexander, Conversational Music (self released, no catalog #). More good news: Aaron Alexander does too.

This is a free-wheeling session where the players cover much ground: freely up swing, out-of-time double soliloquies, rhythmically non-repetitious frameworks for Julian's extremely fertile improvisational inventions, and other things besides.

Aaron can and does play an orchestral sort of set drums. He goes for a sound full and varied and it sets up a context for Mr. Priester's excursions. Julian brings out his patented trombone sound, which has many subtle innuendos but especially distinguishes itself with a bright ringing clariance (I mean like a clarion bell).

Duets of this sort could get tedious if the players don't have a pretty clear idea of the different territories they wish to visit. That is most certainly not a problem on this session.

It's first-rate free-form duotizing. And it's one of the trombone albums of the year in my mind. Need I say more?
Posted by Grego Applegate Edwards at 5:37 AM