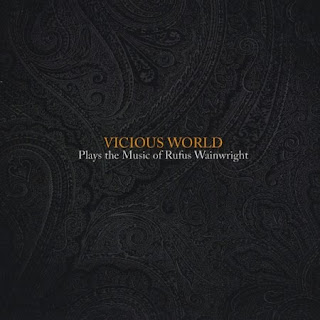 Who is Vicious World and what are they doing messing around with Rufus Wain- wright? Vicious World Plays the Music of Rufus Wainwright (Spinaround SRCD001) is an 11-tune disk played by an unusually instrumented ensemble. Vicious World is the brainchild of reedist Aaron Irwin and Matthew McDonald, trombonist. They are joined by guitarist Sebastian Noelle (who cranks out some solo gems when called upon), plus contrabass, drums, violin and cello.

The sonarity of the combined forces is a big factor in the success of this album. Irwin and McDonald come up with some brilliant arrangements of Wainwright, with the strings adding a carpet of tonality to the front line of bone and winds and the actively tasteful guitar work of Noelle. Bone and sax solos are quite craftworthy as well.

What comes out is almost a Third Stream kind of music, in a lineage from the chamber jazz that the MJQ proferred on their classic album Third Stream.

That's what's happening on this one. It is happening so well that you find yourself transported into its world. You don't worry about WHAT it is because it is so well put together that you let yourself be immersed in it. As far as Wainwright fans go, I don't know what they would think. If they like good sounds they'll like it.

A well executed gem of arrangement brilliance. And there's nothing vicious about it.
Posted by Grego Applegate Edwards at 5:23 AM