Ken Silverman Assembles an Unusual Sextet on "From Emptiness" 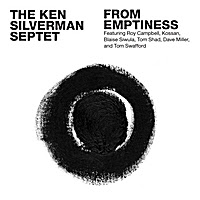 From Emptiness (SoundSeer S1001) is one of those improv dates that starts in a different sort of place and stays there throughout. You are given notice that this is not going to be business-as-usual from the start, with Kossan opening things with some Buddhist chant, followed by Blaise Siwula and Roy Campbell (on alto and trumpet) doing some duo free improvising, eventually joined by Silverman on guitar and Tom Swafford on violin. This is followed by Kossan on Sanshin (a three-stringed stringed instrument from Okinawa) and Dave Miller's free out-of-time drums.

Eventually Tom Shad makes his appearance on the Turkish Cumbus, a banjo-like instrument, along with Ken on Oud, Roy on flute and fluegel, and Blaise on clarinet.

It's a rather unusual melding of chant and free improv, with perhaps chant being the odd-man out. The chants set a tone and atmosphere but otherwise do not have an especially direct relevance to the improvisations that surround them.

However the unusual instrumentation and the free inventive skills of the musicians (especially Siwula and Campbell) carry the day. Maestro Silverman comes through as a guitarist who (along with the rest) is finding intuitive ways of making this musical amalgam work. You get a different view of him than what he sounds like in a more conventional session. There are times when Eastern sounds and Western freedom make a kind of odd-couple partnership. It is in no way uninteresting. It may take some listeners a number of listens before they can assimilate the contrasting strains. It took me a few times.

In the end though you are left with a most unusual concatenation of sounds. I suppose I should say that this is for intrepid listening pioneers particularly. It is not a disk I would recommend for someone still going through the first initiation/immersion in advanced avant improv.
Posted by Grego Applegate Edwards at 5:12 AM