Gilad Atzmon & the Orient House Ensemble, Songs of the Metropolis 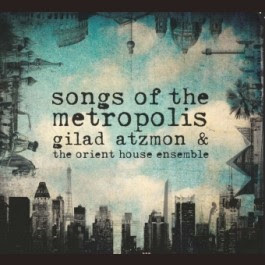 There are times when the persistent presence of artists surprises me. That would be the case recently when I auditioned the new album by Gilad Atzmon & the Orient House Ensemble, Songs of the Metropolis (World Village 450024). The band has been together now for 12 years, gigging around Europe, the world, bringing their sounds to audiences across the planet, recording, doing what they do. Yet I had forgotten how long-lived they've been.

The new one is strong. Gilad has a kind of Eastern European tinge to his clarinet and soprano sax tone, especially. There are traces of Garbarek to be heard there too but it's all wrapped up in his own approach. This new one is all about cities/places of the world. Each cut is devoted to one, and the compositions flow nicely in a post-ECM kind of vaulted classicity. Sometimes it gets a little into a jazz-rockish funk zone, but whatever the stylistic territory Gilad soloes over it all with strength after strength.

It's excellent listening and a beautiful way to launch the band's 13th year. Atzmon can write and he can play. There is very ample evidence of that on these pieces!