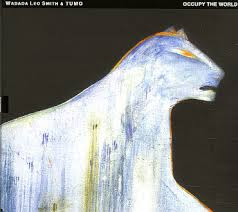 Wadada Leo Smith has been getting the acclaim and critical respect he deserves of late. Not that he hasn't all along. But the monumental achievement of his multi-stylistic, multi-combinatorial Ten Freedom Summers and the recording of most of it that came out last year (I named it my record of the year and reviewed it earlier on these pages) put together all the strands that have been present in his music for many years but never so explicitly and fully expressed. He is a great trumpet player, truly, but then his compositions are really seminal as well.

So when a new double CD of more of his large group avant music came out recently, I certainly was ready for it. Wadada Leo Smith & TUMO and their Occupy the World (TUM CD 037-2) again gives it to us in a great way. In some ways in takes up where Ten Freedom Summers leaves off. In other ways it gives us five discrete compositions that all function as self-contained entities in their own ways. TUMO is a large group-jazz orchestra of European players and Wadada conducts and plays great trumpet throughout. As is the case with Wadada today there still is room for freedom within the structure of the works, of course. So there is a piece that is dedicated to and features John Lindberg on double bass, for example. But there are opportunities throughout for improvisation and the band takes advantage. No one comes across quite as startlingly great as Wadada, but that's as it should be.

It all is monumental "new music" and some of the most important such music we can hear today. Is it at the level of Ten Freedom Summers? Perhaps not quite--but hey, that work is one of the seminal achievements of this century thus far, so you cannot compare. This one has excellence and follows the path of the work before, so it too is essential.

The acclaim is totally deserved. Wadada is what now is about. So get this one too. All the poo-poo-ing of streams, jazz composition or a unified expression of avant music today to include orchestral is naught. Wadada shows us why.