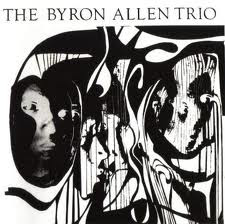 Of all the seminal "new thing" avant jazz releases put out in the early period by the pioneering label ESP-Disk, The Byron Allen Trio (ESP 1005) was perhaps the most obscure. By the time I began collecting everything from that era I could (circa 1971), it was not easy to find. And yet it contains some excellent music. Part of that had to do with the obscurity of the artist himself. He made only one other album much later on and for whatever reason did not have any discernible presence on the scene.

So it is most welcome that this album recently was made available again as part of the remastering/reissue of classic ESP recordings.

Ornette apparently recommended the artist to the label. And so in late 1964 Allen went into the studios with a trio to set down the tracks that were to become the album. It's Allen on alto sax, Maceo Gilchrist, bass, and Theodore Robinson on the drums in a set of four free-wheeling originals.

This is music that quite clearly owes something to Ornette's playing of the era (as did much of the music that made up the second wave of free jazz musicians). Allen and company have the harmelodic looseness of Ornette but Allen stakes out his own turf. He is bluesy-rootsy and outside the bop-structured changes-based music of the prevailing orthodoxy like Ornette, yet he has his own sound and phraseology.

Gilchrist and Robinson participate fully in the three-way interaction with busy pulsations that like Ornette's trio at the time have roots in the time-based OC quartets of earlier years yet build away from the more symmetrical strictures of the original Higgins or Blackwell and Haden rhythm team.

What perhaps surprises is how little dated the music sounds. It feels as fresh today as it must have when it was first recorded. In that way its obscurity (statistically) is underserved. They speak to us. We listen.