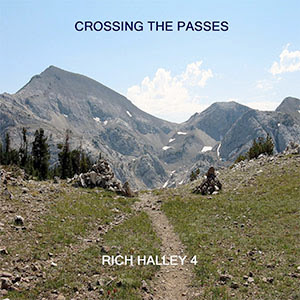 Rich Halley has been breaking it up with some really excellent new jazz for a while. I've been covering it here. Since he's integrated Michael Vlatkovich into the fray on trombone and as his son Rich gets better and better on drums, we see exponential increases in heat and the doing it we associate with music that moves forward and stays hot at the same time, like a two-legged walking range with dinner cooking on it as it moves along on its journey.

I'll put it like this, and right now it is a good criterion for how much I like something. Namely, if I were suddenly forced to move from my current space to a dinky studio apartment, would I bring Crossing the Passes (Pine Eagle 005) with me or give it to somebody who would appreciate it as part of the painful choices one sometimes must make? The answer is, it would go with me.

Why? Because this is music that lives. It has the open swinging qualities of classic Ornette, the music is now though, and the players are doing themselves, not somebody else. Clyde Reed makes a great pairing on bass with drummer Carson. Michael Vlatkovich is a great bonist, unsung maybe but right there at the top of the pack. Rich Halley plays tenor like a mother, and nobody else's mother but his own. The tunes, mostly by Rich with a few collective efforts, are where they need to be to launch the players.

Crossing the Passes swings its way out, freely, and it does it with artistry of the high kind. If you don't have any Halley, here's where you start. You will dig it. I am pretty sure!