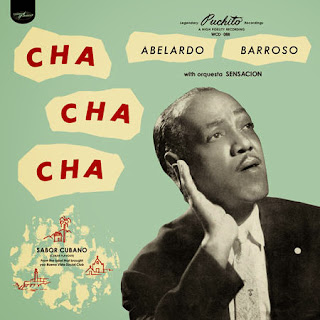 Abelardo Barroso will be a familiar name only to those who are intimate with the history of 20th century Cuban music. Yet he experienced fame as a singer of son in the earlier recorded days and resurrected himself to acclaim in 1955 as the singer with Orquesta Sensacion. The best of those latter sides have been remastered and reissued as Cha Cha Cha. Leader Rolando Valdez gets a beautifully hot yet sweet sound from the strings, flute and rhythm players of Orquesta Sensacion and Barroso soars atop with his golden-toned voice.

The Cha Cha was a hot commodity in those days and the group scored with several hits that played in Cuban jukeboxes continually. The album covers all of that and more.

It's classic Cuban dance music of the era, sounding today every bit as vibrant and infectious as it no doubt did then. With the strings riffing in bowed or pizzicato style, the solid flute player, the horns and the insistent rhythm...and Barroso! This is the band at their height, a period between 1955 and 1959.

It is music that still packs a huge punch. It is an essential slab of Latin music you definitely need to hear and dig!