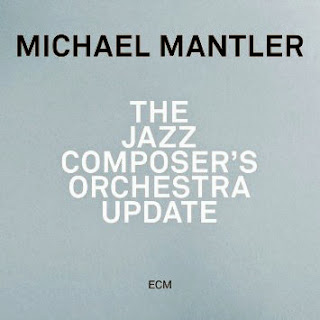 Jazz-composer Michael Mantler in tandem with his then-spouse Carla Bley did an awful lot of good things with the Jazz Composer's Orchestra in its series of recordings--as well as creating a viable model for independent new music distribution while their JCOA remained active. The Mantler JCOA recording came out in 1968 and in many ways revolutionized the idea of the new jazz big band. It remains to this day seminal and sounds every bit as advanced as it did then. Time went on and so also Mantler went on to do other excellent work, but nothing quite on this ambitious scale.

So when Michael agreed to revisit his early scores, both from the original album and not, in conjunction with the Nouvelle Cuisine Big Band under Christoph Cech and the radio.string.quartet.vienna, in a new project for ECM, one had high expectations. What came of it, The Jazz Composer's Orchestra Update (ECM B0022098-02), now out, lives up to expectations in every way.

Sure, we do not have the pathbreaking soloists that were on the original--no Don Cherry, no Pharoah Sanders, no Cecil Taylor, no Larry Coryell...but for that you still need to listen to the original recording, which was reissued some time ago on ECM and I believe is still in print. The new soloists do their job and guitarist Bjarne Roupe gives us some exceptional sounds. The performances and ECM's audio are fully top-notch.

These are reworked charts to include the electric string quartet and Roupe, and as a big bonus provide some excellent scores from the period that have not been previously recorded.

What we get is a beautifully rendered series of large group compositions that not only hold their own, but stand out as models for a modern, "ahead" orchestral jazz every bit as advanced as they sounded back in 1968. Along with the work of the late Sam Rivers, Mantler's charts remain a guiding light for what a modern jazz orchestra can be all about.

The recording is simply excellent.