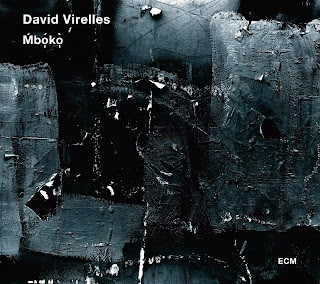 Pianist-composer David Virelles is up to something rather different on his album Mboko (ECM B0021717-02). Cuban born and bred, David has reimagined the music of Abakua, a traditional male initiation society in Cuba that has roots in West Africa. It involves masked dancing and the experience of a cosmic Divine Voice in musical sound.

The essence of Abakua in ritual sound comes to us in recomposed form in a series of ten ritualistic movements for piano (Virelles), two double basses (Thomas Morgan and Robert Hurst), drum set (Marcus Gilmore) and Roman Diaz on the four-drum biankomeko, a fundamental part of Abakua.

The music is not a recreation as much as a contemporary analog to the rite. A ritual feel is at the forefront with the majority of moments where Afro-Cuban rhythm dominates or, alternately, where a kind of musical incantation is at the fore.

Virelles solos over the hypnotic rhythms in a very modernized Afro-Cuban mode, both engaging Afro-Cuban pianistic tradition and going forward in a sort of post-Bley avantness.

He played on recent albums by Tomasz Stanko and Chris Potter so his jazz credentials are strong. This album expands his approach both backwards to ancient roots and forwards into the advanced present.

The result is long-formed development of sound-specific mood over a full-length program. It is a vibrant, singular disk that takes its time creating sound worlds very worthy of Afro-Cuban tradition yet in their own way an extension into high-art improvisatory realms.

Hearing Mboko brings you under a spell that engages a sacred spirituality. It does it with a definite personal touch that calls attention to David Virelles as an artist of real importance. I hope we get to hear much more from him in the years to come.