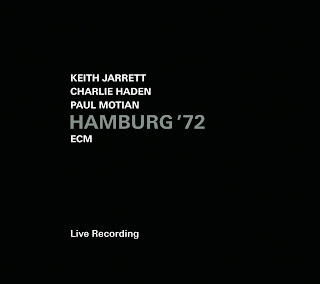 For all the beautiful things Keith Jarrett has done in his career, the original trio of Keith, bassist Charlie Haden and drummer Paul Motian, with or without Dewey Redman, holds a special place in the music of the later 20th-century. After all this was, following Keith's important association with Charles Lloyd, the group that gave us the first phase of Jarrettian music. The amazing runs, yes, and the compositional clout of the man, the free interplay of the three masters which both came out of the influences of Ornette Coleman and Paul Bley in solo and group playing, but then went beyond that into something very special and original.

Sitting here listening to the newly released, previously unreleased Hamburg '72 (ECM B0022313-02), with that trio in their last phase, I am struck anew on the tragedy of loss. Paul Motian is gone and now so is Charlie Haden. We can never hear this trio as a living entity, never again. But we can hear them of course in all their recorded glory. In this case a finely sonic live recording of the trio in their last full flowering is what brings tribute and remembrance in a very fitting way.

It is beautiful to hear this, to me. Make no mistake. They are filled with the special creative synergy of the three as a oneness, no less here than in previous recordings. There is a spirit of adventure in their extraordinarily productive looseness. Keith is playing at one of his peaks, not just from the piano chair but also on soprano sax, something we took for granted then, but in its absence today we shouldn't have. He was singular there as on piano, just a bit less developed technically, of course.

But the interaction of Keith, Charlie and Paul is there. Again we may have taken it for granted in some ways, but there was a magic and a tabula rasa uniqueness of the way Paul and Charlie came up with ways of propulsing freely yet very personally. Add Keith and there is a dynamism of free structure in every way pattern-setting. The trio ultimately had a huge influence, on just about every piano trio that came after, in terms of those with a free avant approach, and even those who didn't.

And you can here why on this recording clearly. More than that, the pieces played on this date sound especially good because they are never played quite like this before or after. Charlie's "Song for Che" is momentous, never played by Keith otherwise in recordings. Rather momentous also are the versions of Keith's "Piece for Ornette," "Everything that Lives Laments" and "Take Me Back."

It is as fitting a tribute to Charlie and Paul as anything, for they sound beautiful. And so does Keith. All three would go on to do other work, great work, but the special magic of these three together would never quite be equalled. This issue is important because it gives us the trio in ways that we didn't hear on record at that point. The trio so late on, as a trio.

If you love this period, or even if you don't know it all that well, this must be heard!