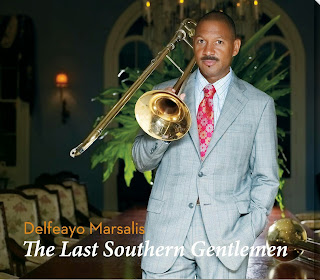 Over time the trombone contingent of the Marsalis family, namely Delfeayo, has not gotten near the attention of brothers Wynton and Branford, yet he is a musician of real stature. He and his father Ellis team up with an excellent quartet on The Last Southern Gentlemen (Troubadour 081814).

Ellis's well conceived pianism adds much to the proceedings. He sounds as great as ever. Filling the rhythm team chairs are bassist John Clayton, who brings excellent note choice and a fullness to his role, and "Smitty" Smith on drums, a monster that we don't hear as much of lately as we might wish, but plays his role to the max here.

The program is a mix of standard chestnuts, originals and a surprisingly fetching New Orleans rendition of the theme from "Sesame Street" with some hip wah-wah bone from Delfeayo.

It's old-school mainstream that manages to sound fresh, thanks to the complete trombone excellence of Delfeayo, in whom you can hear the entire history of the instrument, filtered and selectively grooved and burnished by intensive living within the tradition. I guess by now you should expect such a thing of Mr. Marsalis. But he and the quartet are so dedicated to it, without pretense or contrivance, that it rings very, very true.

It gives you the straight-from-the-heart classicism that warms the soul and mind of this listener, for one. Delfeayo is a master. Like early-middle-period Miles, he can play a worn out old tune and make it come through with bell-like directness, not so much through a noteful virtuosity as via attention to the tone and attack of every note.

So in the doing of all this The Last Southern Gentleman brings much pleasure. A trombone cornucopia such as this fits all seasons. Things never grow tired when the spirit is there. It is there.