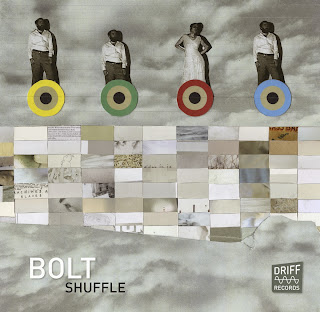 If I am a little late covering Shuffle (Driff 1402) by the quartet known as Bolt, it is not because I think the music is second tier. On the contrary. My stacks of review CDs that I slate for coverage become a little chaotic during peak periods, and I am afraid this one got tucked away in the back where I did not notice it for a few months.

But we press on and shed some appreciative light (mixed metaphor?) on the album today.

Bolt offers us an absorbing series of 19 mostly short free improvisational events. The album advises us to set our players to the "shuffle" mode, as the sequence can be heard in any number of ways. Hence the title of the album. It is a tribute to the inventive powers of the quartet that each number carries with it its own mood and personality, more or less. Each number bears a distinctive modular independance so you can enjoy the sum total in whatever sequence you wish.

In part that is because the players have both an individual and collective acumen that they turn loose on the segments. Jorrit Dijkstra is well-known to us as an alto saxist of stature. He also appears here on the lyricon and adds atmospheric analog electronics. Eric Hofbauer plays mostly electric guitar. I've covered some fine outings of his on the guitar blog, which you can reference easily enough by typing his name on the search box for that site. Junko Fujiwara adds her considerable sonic color and inventiveness on cello. And Eric Rosenthal has an important presence as the drummer-percussionist.

This is spontaneous music at its best. All are attuned to one another and listen closely without breaking their independent sonic stance. Each cut has textural-instrumental clarity, each in its own way. Some sound "free" in a classic sense; others are more frankly experimental. All reach good places and provide the listener with a mini-world of sound and structure, feeling and interplay. The going from sound station to sound station provides plenty of fascination and stimulation.

Driff records is off to a great start. This one is no exception. Good nourishment for the ears, this is!