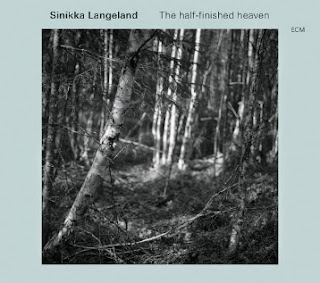 Over the years ECM and Manfred Eicher have introduced us to important Scandanavian artists who span both the jazz and neo-folk worlds. Of course Garbarek and Rypdal have made a huge impact, but then there have been others less directly concerned with jazz but working with folk and song worlds in different ways.

Such an artist and a very shining example is Sinikka Langeland, a creator-performer who stands out in her own way as a maker of music both typical of ECM's tonal ambience and very much an artist in her own right. Her fourth album, The Half-Finished Heaven (ECM B0022777-02), brings us squarely into her enchanted world, with folk-like and folk- rooted song that has an almost neo-medieval sound, especially in her playing of the kantele, a zither-like instrument that has medieval counterparts.

The music is performed by her quartet: Sinikka on vocals and kantele, Lars Anders Tomter on viola, Trygve Seim on tenor saxophone and Markku Ounaskari on percussion. The quartet configuration and the various musical personalities involved allow Sinikka to explore a contemporary music that shows folk-roots but also engages in contemporary and jazz-oriented excursions.

Sinikka sings beautifully, her kantele playing can be traditional or contemporary and the band contributes much both through the collective arrangements and the sonic identities of each.

It is music both stunning and beautiful in its very own way. Very recommended!