Mikko Innanen with William Parker and Andrew Cyrille, Song for a New Decade 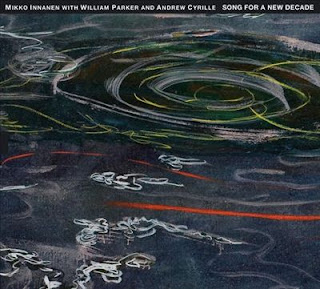 The Finnish world of young avant saxophonist Mikko Innanen joins with the New York vet worlds of William Parker and Andrew Cyrille (bass and drums, if you need to be told) on a recent two-CD set Song for a New Decade (TUM 042-2). The first disk features the trio in full flower, the second a series of fascinating duets by Innanen and Cyrille.

All of it works very well. Innanen in spite of his youth sounds mature and well into his way of playing, on alto especially but also baritone and miscellaneous winds.

Parker and Cyrille sound excellent throughout, with no signs of slowing down, at a peak of inventive creativity. If you were to focus on following either or both players throughout the program, your ears would profit greatly by the experience. Neither player can be mistaken for someone else once you get familiar with their playing and both can get free or swing or both with their own special way.

What they provide Innanen is an ideal playing situation. Wherever he goes, they are not only there, they virtually anticipate.

Innanen is a stylist in the free-zone who is well on the way to a real originality that is nevertheless rooted in the late improv and free tradition. Playing with the two masters here he is inspired to outdo himself.

There is much excellent music to be heard on the two-CD set. None of it sounds rote or routine. Quite the opposite. Hear this one, by all means!