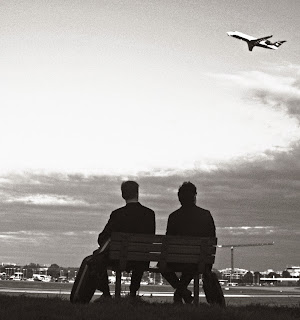 The duo Ghost Trees used to be a trio called The Eastern Seaboard, with a number of releases and some acclaim, until the bass player decided to go elsewhere. The two remaining members, Brent Bagwell on tenor sax and Seth Nanaa on drums, decided to stay with a two-person lineup. That works very well on their new, beautifully produced and mastered limited edition clear vinyl LP release, The New Gravity (MTM 001). The album shows us the togetherness and excellent sense of space the two have developed with a free-avant jazz program that centers around as a rule specific melodic cells and their expansion-variation.

The duo is joined periodically by the Wm. B. Kennedy Chamber Ensemble (strings and piano). The latter also on occasion state a theme alone.

The dramatically effective use of free drumming along with motives and development on tenor--laced with interludes of general improvised freedom--and an enriched sound with occasional chamber support mean that Ghost Trees do much more with what on the surface seems at first a simple set of premises, less. They end up with something not really so simple at all, something extremely evocative and attractive.

I would recommend highly that you listen to this one. You can check out a sample track at http://ghost-trees.bandcamp.com/album/the-new-gravity and also find out how to order the vinyl. It puts a rather different spin on "freedom" and ends up giving us very good music from beginning to end.