Eric Plaks Quintet, Some Ones 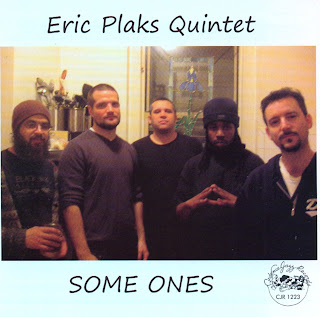 Eric Plaks? Yes. You may not be familiar with him. He is a pianist-tunesmith who works in an inside-out, outside-in fashion to cover both the bop-and-after past and the avant-free present with convincing poise. What I believe is the debut of his quintet can be heard on the recent release Some Ones (Cadence Jazz 1223). It is music to hear, a program of originals and standards.

The band is an interesting mix of individual voices. Don Chapman is on tenor and soprano, Alan Davis on tenor, Leco Reis on bass, Jon Panikkar on drums and of course Eric Plaks on piano. Panikkar shares the writing credits with Plaks for many of the originals, the others are Plaks' sole doing. These numbers have some interestingly original twists and turns and are generally in the avant-out style. The standards include "My Shining Hour," "My Favorite Things," Duke's "African Flower" and "42nd Street."

The rhythm team propulses the band well, whether swinging or taking it out. The two-sax team play the inside standards in an out way. They clearly do not come out of a hard bop school and take avant liberties that a strict moldy fig might not find to his or her taste. They have the energetic immediacy of new thing though and it makes for exhilarating listening even if technically they would not be the sort who would have found a lasting home as part of Art Blakey's Jazz Messengers or other such outfits. On purely out turf they make themselves a bit more at home, but in any event they are unpredictable and so you listen willingly and get something back that's worthy of the eartime.

Eric Plaks plays convincingly in ways that show a kinship with Cecil Taylor, perhaps Jaki Byard and Don Pullen, in the way he can pull off an in-and-out approach to the traditional repertoire (which in some ways is a strong suit with him) and then get into a scatter, all-over out piano style that owes something to Cecil. The combination of influences and what is done with them make Eric Plaks a pianist of high interest and real potential. The album shows him inventive, creative and off-the-wall/on-the-wall at various points but with a good sense of where he is going, it seems.

The out originals have that nicely kinetic charge. Some are more involved than others but all seem to give an effective platform for the solos and sometimes are more substantial as well.

All-in-all this is very stimulating music. It may not be perfectly evolved at this point but it makes up for that in its fired-up authenticity. There is nothing polite about it and for that and what is done with avant and earlier traditions it is a very worthy listen. Kudos!