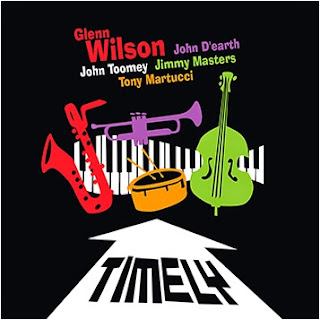 When we mentally list the names of living baritone sax titans chances are we do not think to list Glenn Wilson, yet he has been doing excellent work for decades. He deserves wider recognition, surely. The reasons why he is relatively unsung are various and part of that has to do with not always living in locations where recognition is easy to gain. The rest may be just a product of chance. Either way it is very good to see him back on the recorded scene with a live album of his band recorded at the Havana Nights Jazz Club in Virginia Beach, circa 2012. Timely (Cadence Jazz 1255) is the apt title of the album. His reappearance is definitely that.

It's Glenn and his band playing a couple of originals and a good selection of numbers by jazzmen both well-covered and less so: Wayne Shorter, Larry Willis, Pepper Adams, Bob Dorough and Bob Belden. It is a treat to hear the band do an instrumental version of Dorough's "Nothing Like You," which Bob of course made well known when he sung it as part of a mid-sixties Miles Davis album. All the material suits the band well and allows them to launch some nice solos.

Glenn is joined by John D'earth on Trumpet and Flugel, a talented voice in the bop-and-after brassy mode. John Toomey plays some very good, harmonically rich and line savvy modern mainstream piano, and the rhythm team of Jimmy Masters on bass and Tony Martucci, drums, have the drive, expertise and sensibility to get everything swinging right.

The band sounds classic, in a '60s Blue Note-ish way, old school but with their own solo personalities and distinctive rhythm section presence. D'earth and Toomey solo extensively and well, but the primary attraction in the end is Glenn Wilson for his considerably inventive solo presence, his ability to weave beautiful lines with that big baritone sound.

The set is an excellent one, with a generous playing time and some consistently inspired playing. It has the fire of conviction and shows us why Glenn Wilson and his band are something to hear and appreciate. Glenn can PLAY! I am glad to have this one.