Jack DeJohnette, Made in Chicago 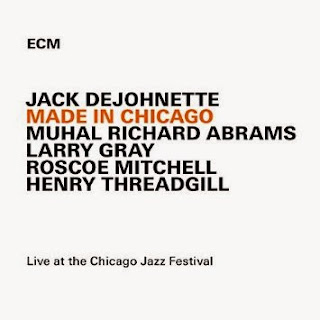 A good case could be made for the stylistically innovative jazz drumming of master Jack DeJohnette. I would go so far as to say that in the past half-century, the influence of Elvin Jones and Tony Williams is paramount, but that DeJohnette certainly belongs up there as well. If one were to make a few more choices things might get controversial, but there is more or less a consensus that those three have stood out and established model drumming styles that remain very much a part of the vocabulary of the new jazz today.

Jack reminds us he is very much still on the cutting edge with a live reunion of his Chicago colleagues from the early AACM period, when Jack had Roscoe Mitchell and Henry Threadgill as classmates and musical collaborators, and all three joined Muhal Richard Abrams' Experimental Band, all this in the period of 1962-65. All four reunited for a special concert appearance for the Chicago Jazz Festival in Millennial Park, August, 2013. Larry Gray appeared as the bassist to complete the group. Happily the tapes were rolling and we can now hear the concert on the new CD Made in Chicago (ECM 2392).

Five long numbers represent compositions by each of the principals; they conclude with a freely improvised piece. Of course it is the interactions between and solo adventures of DeJohnette, Mitchell, Threadgill and Abrams that we anticipate on contemplating the music, and on hearing we are not disappointed. All are most certainly up for it and fall naturally into free dialogues. And the compositions themselves give us something very good as well.

As much as Jack has flourished during his lengthy tenure as the drummer with Keith Jarrett's Standards Trio, it is great to hear him break loose in the company of Chicago's legendary innovators. And Jack's presence plus an enthusiastic audience seems to inspire the quintet to a very focused openness.

In short this is more than just a nostalgic reunion. It produces some avant jazz of real consequence. DeJohnette and Manfred Eicher mix down the original tracks for a very worthy sonic result, too, so all is just right.

It is music of importance. Do not hesitate!