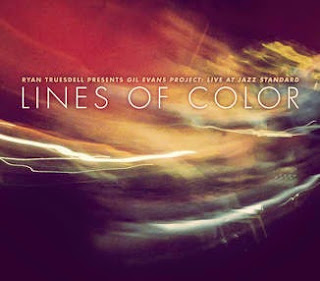 Ryan Truesdell has selflessly and superbly given himself to realizing Gil Evans arrangements and compositions, notably unearthing music we have never heard in recorded form. Centennial was the album that gave us so much obscure Gil Evans, impeccably done, that it was almost as if he had returned to earth to fill us in with what we missed. I gave the album a rave on these pages last July 3rd, 2012 (see that post).

Now Ryan and the Gil Evans Project return with a live date recorded at New York's Jazz Standard, Lines of Color (Blue Note/ArtistShare). It is a remarkably tight and versatile band and they run through a wealth of Evans charts, some fairly well-known ("Time of the Barracudas," 1964 version) or unknown ("Avalon Town," an unrecorded Thornhill chart from 1946).

Evans appreciators will find the album a treasure-trove of Evans from virtually all periods of his career. The sound is great, the performances sterling and very stirring.

It's a beautiful record, a must for the Evans aficionado and anyone interested in innovative compositional-arranged big band sounds from the last century.

It captures your ears from the start and gives you a full picture of Gil Evans and the great artist he was.