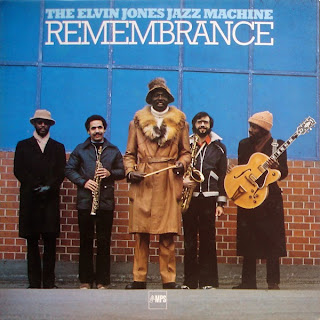 Elvin Jones was one of the monstrously innovative jazz drummers of the second half of the 20th century, of course, belonging at the top of a very small pantheon of greats. With his extraordinarily influential way of swinging with Coltrane and later in a wonderful series of his own bands, he set the pace for both playing time and establishing a post-Trane style that combined the in and the out in convincing and exhilarating ways. His series of Blue Note recordings after leaving Trane are unparalleled, but there is much excellent music to be heard in the years following as well.

A very good example is with us happily as a reissue from the MPS revival going on right now. It is the 1977 date Remembrance (MPS 0209724) with a very good edition of the Elvin Jones Jazz Machine. It shows the band in a tight and energetic mood, with some very sparkling band originals. By then Pat LaBarbera had become a central member on tenor and soprano. He sounds great on the album. Joining him in the reed section is Michael Stuart, again on tenor and soprano. Both channel a post-Trane approach with artistic elan and team up for nice two-horn soundings of the head melodies.

Roland Prince on guitar gave the band a very capable instrumentalist who supplied a different, more transparent sound through a lighter comping than a Tyner sort of pianist might. He could weave a good solo too. Andy McCloud III had the bass chair then, providing a rock-solid foundation so essential for Elvin to set his time against.

Pat LaBarbera wrote four of the seven tunes, Don Garcia wrote one, as did Michael Stuart and Andy McCloud III. They are memorable and perfectly fitting vehicles for the improvisations that follow.

Elvin is at a peak as the wonderful drummer he was...and the band drives hard and loose as classic Elvin ensembles did.

This one may not be well-known but it is surely one of Elvin's very best in the post-Blue-Note discography.

Get it and you won't be disappointed. Long live Elvin!