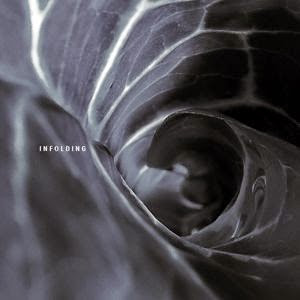 I first heard Norwegian trumpeter Nils Petter Molvaer with his group opening for Terje Rypdal in a live New York appearance sometime around 1997, the same year his ECM album Khmer was released. I liked what I heard on the bandstand and I liked the album, too. But somehow I got sidetracked (mostly in overwork) and lost sight of his very electric post-Milesean trumpet and group sound, though other albums followed.

So now I am pleased these years later to find him back into my earspan as a part of the band Spin Marvel, on the recent album Infolding (Rarenoise 34849).

It is an excellent spaced-out electronic free-jazz-rock sound the band gets on this delightful slab. With Nils is a solid lineup of Martin France on drums, Terje Evensen on live electronics, and Tim Harries on bass. These are free group improvs that have a pronounced and varied group routine that comes through distinctively on the six tracks of the album.

Nils sounds as good as ever in his post-Miles lyrical outness, whether his trumpet is redolent with effects or not. There are some excellently spooky moments when Nils creates sonic auras that grab you and thrust you outwards into cosmic territory.

France on drums is a very creative force, not content to just lay down time but also straying into the open-field arrhythmia that he approaches very creatively, with some Floyd-Hendrix-Baker toms as well as free jazz inflections. Bassist Harries also does not remain in a riffing zone so much as he brings up the sonic bottom with electric freedom. And Evensen is a key factor in the mix, too, giving much color and texture to the sound with expansive electrical clouds.

For those who like to dwell in high musical places Spin Marvel carry on the post-psychedelic art and bring it to original places. Those who eschew electronics may not care for the music, but if they give it a chance they might see how the present is an evolvement when done so nicely as this of our not always halcyon days musically speaking, that is, as a very legitimate contemporary presence and advanced musical art form.

The electric free sound continues to grow and progress. Spin Marvel is one of the glowing examples of how that is happening. This album will take you back to the future in ways both original and moving!