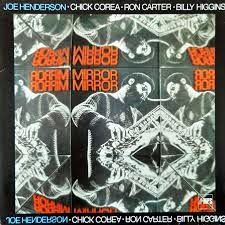 It seems that the stature and reputation of jazz tenorman Joe Henderson keeps growing as the years pass. He has always been well-appreciated by those in the know, but as time moves by he perhaps is getting the wider recognition he well deserves.

It's sometimes simplistic to generalize too much, but Henderson's career might be divided into a number of style periods: the hard bop notoriety he received as a member of Horace Silver's band and in the early Blue Note recordings, a turn to a free-er approach and an incorporation of rock-funk elements in the wake of Miles's innovations, and a return synthesis of hard-bop and after in the final period. In all the shifting allegiances nothing in his output ever suggests formulaic or uninspired work. It all has a mastery to it that centers around his completely individual sound and style on the tenor, Coltrane influenced perhaps, but all his own.

In 1980 he went into a studio in Los Angeles to record an album that was released on MPS at the time as Mirror Mirror (MPS 0209734). It is now happily reissued on CD. He chose a very compatible and brilliant set of sidemen in Chick Corea on piano, Ron Carter on bass and Billy Higgins on drums. This was not just an all-star grouping but one very attuned to what Henderson was after.

It marks in a way the beginnings of his period of synthesis, where he both returns to some of the hard bop roots but transcends them while keeping a looser free-ish approach.

This is very much a group effort, all four contributing to the special sound and dynamic of the whole. As if to underscore this, the originals (all very good) are penned variously by Joe (one), Chick (two) and Ron (two). There is also a nice version of the standard "What's New."

It may take a couple of listens to enter fully into this one, for there is much excellent interplay to be heard. Once you do that you no doubt with be very much there for this one. It is perhaps not as well known as some of Joe's albums but it is a sleeper, an excellent date that deserves to be heard by all into serious jazz of the era.

I am glad to have it to hear often in the years to come! I think you will be, too.