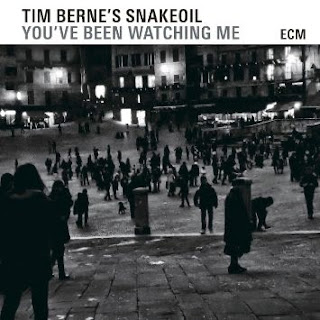 Tim Berne and his ensemble Snakeoil are entering a phase of full-flower. That is on the new album You've Been Watching Me (ECM B0022874-02). The ensemble engages in a musical direction that's been implied and partly realized in their very worthy previous albums. But it seems that the implications have moved forward to a fruition that places them in a stylistic zone very characteristic of Tim Berne's musical tendencies but now squarely situated in very much their own space.

Pianist Mitchell is often in a gravitating, pivotal role as the center of the many perpetuum mobile cycles of repetition, which are rhythmically precise but cross-positioned against a two or four beat pulse so they act polyrhythmically and poly-semantically, or in other words you hear the whole in multiple dimensions.

The repeating figures are more and more contrapuntal, and the role of all here is to extend and expand in between the crevices of the mobiles, to act within and outside of the event horizons in improvisational ways when they are not called upon to be a direct part of the orbiting motives.

What's exhilarating about it all especially on this new album is how the multiple dimensional presence of the orbital figures and the free expressions that pulsate around and outside of them work together for a complex whole that has free energy but yet functions in a very compositionally structured framework.

There is a little of the rabbit or duck oscillation that happens in the listener's ear at key points, like a gestalt poly-image that you can see two ways and continually shift back and forth between them.

All the artists contribute their very personal sound signatures in the best ways while doing something always within the original world of Berne's Snakeoil. That is a group-concept accomplishment worthy of the highest praise and of course not often the rule in the jazz world except when the melding of artist and group reach a symbiotic stage--Duke's bands, Miles, Trane all come to mind as the most enduringly successful music mind melds. Snakeoil has reached something of that stage. Now of course we will look forward to how that can proceed, continue, develop even further.

But all that is secondary to the sheer mental-emotional pleasure one feels once one has gotten inside this music. It's pretty seminal! You must dive into this one ears first. The rewards are considerable. Listen and grok!

Oh, by the way, the band is touring the USA now through May if you are interested. Google Tim Berne's Snakeoil for the details.