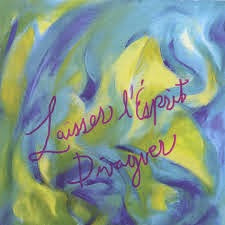 So just what is "jazz?" It's the total sum of important historical styles that went under that name, plus what it is right now and what it will become in the future. There is no music made under that name, in the serious practice of the art, that does not have some relation to the past styles, but of course to greater or lesser degrees. Needless to say jazz came about as Afro-American elements freely mingled with local vernacular music of the brass bands, popular song and any number of other things we need not go into here.

The most advanced exponents of avant garde jazz have traces of the past mixed into the matrix if you listen closely. And so it is nicely the case with a series of two piano duets in a very advanced realm, Laisser l'Esprit Divaguer (Studio 234 010), featuring a CD length piano duet from Francois Tusques and Francois Toullec, and another one filling a second CD by Eric Zinman and Tusques.

Tusques of course is an avant vet who has made his mark over the years as an original force on the European scene. Eric Zinman is a well-seasoned American exponent who has been rapidly gaining more attention in recent years as a pianist to hear. I am not that familiar with Francois Toullec, but she is a important figure in French circles and sounds well on the album.

The first duet employs prepared pianos part of the time and has a pronounced new music feel much of the time, though roots in jazz show themselves, especially towards the end. The second disk of Zinman-Tusques has more consistently pronounced jazz improvisational roots, but also has an uncompromising advanced stance.

It is a tribute, first off, to the long-standing originality of Francois Tusques, but also a showcase equally for the very together playing of Zinman and Toullec. Both sessions give us inspired improvisations that pack an explosive charge in the very sympathetic two-way interactions of the pianists. Everything remains very much in focus. There are no tentative gropings to be heard. All three get to it from the start and stay in good zones.

Anyone interested in the art of avant improvisations on piano should hear this set. It is the real thing, superb in its own way!