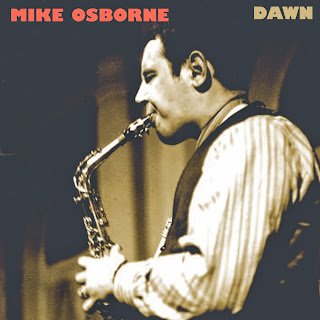 The brilliant and short-lived English alto saxophonist Mike Osborne left us too soon, initially due to a debilitating mental illness and then from a physical departure, his death in 2007. While he was actively on the scene he carved out an avant style of jazz largely all his own, though of course squarely within the outside vocabulary that was in the wind then.

With Dawn (Cuneiform Rune 392) we have some excellent barely released or unreleased examples of his music, starting with a marvelous set of 1970 sessions featuring his trio with Harry Miller (bass) and Louis Moholo (drums). They are very fired up and show just how evolved and original a unit they were already.

The second half of the album features a rare session from 1966 that spotlights Osborne and John Surman on the front line and Alan Jackson on drums, Harry Miller on bass. They are clearly at this stage under the spell of Ornette and American New Thing masters, playing a Pharoah Sanders composition, one by Carla Bley and a Booker Little chestnut. There is also an Osborne original. It is a complete view of the first flowering of English avant, not just a historical document but very good music in itself.

Like Cuneiform's release a while ago of unknown SOS recordings (in which Surman and Osborne were key members, type "SOS" in the search box above for that review), this release broadens the picture with some essential examples of the burgeoning of British avant jazz and by so doing gives you a look at the talent and special ways of Mike Osborne.

I am very glad to have it to hear repeatedly. It does its job well, to remind us of the centrality or Mike Osborne in those heady days. And it sounds refreshingly new listening today. Bravo!