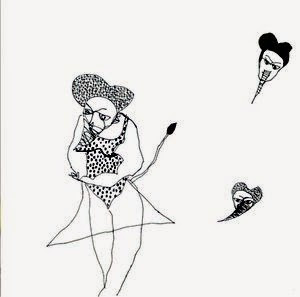 Today's recording illustrates well why streaming, aside from economic considerations, is not a good idea for really new music, music that transcends borders and boundaries and has originality. I was happily sent the CD by Japanese avant artists Keiko Higuchi and Yasumune Morishige, entitled Awai (Improvising Beings 19). It is an extended performance in eight segments of Keiko on vocals and Yasumune on cello. The first listen left me puzzled and unsure. The second, pretty much the same. But on the third, complete listen I started to "get it." The fourth listen confirmed that and now when I listen the fifth time as I write this I am convinced. If I had been surfing around on a streaming service and came upon this music I would have listened for a few minutes and no doubt would have switched off in impatience, ready to go on to the 100 or so other examples that I could hear of new music where if the result was immediately palpable and gratifying I would have stayed with it. The truth is, some music cannot be casually engaged with if you are going to grow to like it. And that sort of "difficult" music is often what new music can give you. But you cannot flirt with it. You must engage seriously.

For your ears to grow there is a good deal of effort needed, in other words, which streaming does not always lend itself to.

So this brings us back to the CD at hand. This is music that requires time and patience to appreciate. Then, at least for me, it started to stand out as a pretty extraordinary thing. Keiko Higuchi vocalizes in ways that are both avant and very musical. The pitched perfection of her note choices are given presence by her use of vocal, syllabic tone color and a vivid sense of space that seems very Japanese somehow, in the classic minimalist sense of some of the architecture and classic traditional music. It is firmly avant garde and "free" improvisatory, but not as linear and dense as most of the music we have heard. Yasumine Morishige on cello brings us the instrumental equivalent. Sound utterance is surrounded by space. The sounds of the cello are very much colored by harmonics and unconventional playing techniques. There is never a sense of abundance to the cello as much as a subtracting out of anything superfluous, so that the combination of vocal and cello is weeded of all extra soundings and we are left with a starkly vivid essence.

And as I said, it does not come together without the repeated presence of the fully listening musical mind. Then it becomes something extraordinary. Further description does not seem necessary in the spirit of the music. This is something very different and in its own way a landmark of sonic profundity. You must listen to get it. So get it and you'll eventually get it. All adventurous souls will, with a bit of work, find this most revealing, I think. An impressive outing, extreme but very deep, it seems to me.