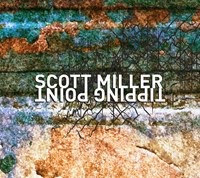 Scott Miller, or Scott L. Miller to be precise, is not a jazz composer in the usual sense. Yet his music has a new music-avant jazz synergy. I covered several of his albums on my Gapplegate Classical-Modern Music Review. You can go there and type in his name in the search box to find those. I post the latest review here because his music seems to me will be of equal interest to avant jazz aficionados as it is to new music listeners.

And so we have the latest one, Tipping Point (New Focus 161), which features the chamber ensemble Zeitgeist, with whom Miller has collaborated since 2003, and electroacoustics, an important component of much of his work.

Six pieces are presented on the album, some previously unrecorded, some new. Zeitgeist consists of piano, two percussionists and woodwinds. They seem especially well-suited to the music, which has tonal and more avant structures and a kind of direct expressiveness that brings it closer to avant jazz than some other composers. Soprano Carrie Henneman Shaw graces the ensemble on three of the six works represented and sounds excellent.

It is music better heard than described, except to say that Miller has a real flair for evocative new music which he gives us ample evidence of in these works.

If you want to be introduced to a new voice on the scene, or even if you know his music already, this one is a seminal example of why he is important. Give Tipping Point your ears and I think you will be pleased.

Posted by Grego Applegate Edwards at 5:27 AM