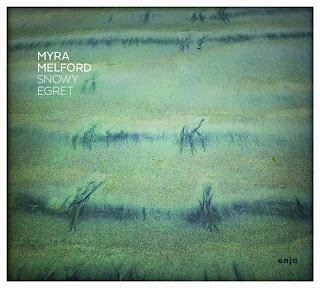 The first installment of pianist-composer Myra Melford's band Snowy Egret has been upon us for several months. I finally get to it today. It is self-titled (Enja) but otherwise there is nothing generic about it.

Myra originally formed the group for a specific project, a suite based on author Eduardo Galeano's Memory of Fire trilogy. From there they went on to record this, their first album. Melford is joined by Tyshawn Sorey, Ron Miles, Liberty Ellman, and Stomu Takeishi.

The music is both open and composed. There are some very intriguing moments where Ms. Melford's piano sensibilities are at the forefront. There are ensemble moments of compositional interest, ranging the gamut from rock-funk-ish to free to balladic, but all of it bears the Melford stamp of identity. And there is space for some excellent group and individual improvisational adventures.

Everyone sounds very good. It is in every way a showcase for Myra and her musical vision and the entire band adds much to it. Recommended!

Posted by Grego Applegate Edwards at 5:32 AM