Steve Cromity, All My Tomorrows 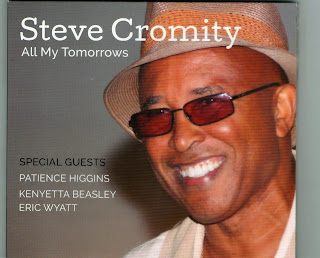 When I put on the album by jazz singer Steve Cromity, All My Tomorrows (self released), I experienced a mild surprise. Superficially Steve has that burnished, laid-back crooning style that I identify with middle-period Frank Sinatra. As you listen you realize there is much more to his approach, in that he has his own nuanced phrasing that is a little more jazzed than you would ordinarily get with Frank. And ultimately you hear that he has his own way and a sound that differs enough from Sinatra so that the deja vu feeling fades quickly.

So we get Steve with a true, swinging jazz outfit that includes Eric Wyatt's tenor, Kenyetta Beasley's trumpet, Marcus Persiani's piano and music direction, and for five cuts Patience Higgins on tenor, soprano and flute. The nicely worked-through arrangements are by Persiani, Steve and Rob Crocker.

But it all comes through as straightforward and swinging, with nice solo spots for the principals and Steve holding forth very musically as a vocalist of stature.

Frank? No, not really. It's good music and Steve Cromity is the real thing.