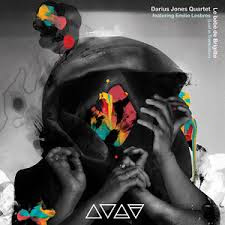 Darius Jones is not only an alto saxophonist of importance in the new "jazz." He is also a composer-conceptualist of great imagination and merit. You get all of that in his latest album, volume five in his "Man'ish Boy" epic. Le bebe de Brigitte (Lost in Translation) (AUM Fidelity 095) is the Jones Quartet with vocalist Emilie Lesbros. The instrumentalists are Jones of course, Matt Mitchell on piano and Rhodes, Sean Conly on bass, Ches Smith on drums plus Pascal Niggenkemper adding his bass for one number.

The compositional element drives the music in various directions, from a swinging feel to bluesiness, balladry, a freely forward moving, and such. Emilie Lesbros is very much integral to it all, out front and expressively present. She contributes some of the lyrics and on one she is composer and lyricist. Darius gives us five compositions and wrote the lyrics for two of them.

This is all about identity, about, in Maestro Jones' words, how "much of the hatred and ugliness in the world comes from everyone trying to create a unison when they should be striving to create a harmony." When people fail to communicate effectively with one another, it often has to do with differences in language and culture. There is a kind of loss in translation. Much effort is needed to come to understand those people who come from contrasting backgrounds from your own, and this music embodies that problem as well as solves it in a real-time microcosm.

Such is the case, Jones notes, in a musical encounter as much as it is in any other. And so this album and its music is that attempt to arrive at a harmony. That it does is a part of Jones' own conceptually directed openness as well as the band's identity as developed individuals each with a place they have come from as well as a distinct something to say.

The result is a product of the very musical sensibilities of Jones, Lesbros, Mitchell, Conly, Smith (and Niggenkemper) and Jones' strong compositional framework.

Darius sounds especially beautiful on alto here, expressive and singular. The band in each of its parts stands out as a whole, too. Mitchell is a rapidly moving force on piano these days and he contributes some fine work. But then everybody is key here.

The many moods and nuances of the music make for an excellent set. It is music that requires your active participation, of course. If you devote your undivided attention to it, worthwhile unfolding universes of meaning and mood are revealed.

One of the serious contenders for the year's best! Need I say more? Hear it.