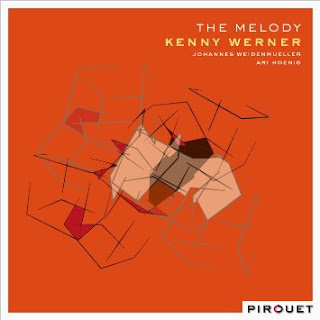 In the later '80s, with graduate school behind me, back in the NY Metro area, I had one of those kind of deja-vu experiences one has all too infrequently. My friends and I decided to catch a set with the Eddie Gomez group at the now defunct New York club Fat Tuesday's. We had a good table and the band sounded well. I took a look at the piano player and it hit me that I somehow knew the guy, while I was digging what he was doing. It eventually dawned on me that this fellow was a classmate of mine some 15 years before at Berklee, that I had seen him around in the halls though I never actually knew him. It was Kenny Werner, by then well established as a jazz artist around the scene. I knew his name from record albums, knew and appreciated his work, but his face in person told me that our paths had crossed physically those years ago.

Time has gone by, Kenny has further enhanced his reputation as a pianist of true importance with Joe Lovano and others, he has written a fine book about musical mastery, and now here he is again--with a piano trio album, The Melody (Pirouet 3083).

Just because we passed each other in the hallways in 1971 is of course no reason to like his music. That is something one either hears and appreciates or does not. I have found him to be an excellent exponent of modern harmonically rich jazz for some time now. He clearly has grown out of the Bill Evans, Herbie Hancock, Chick Corea acoustic modes, but over the years and now especially has turned that into his own completely original sound.

The trio sports excellent players in Johannes Weidenmueller on bass and Art Hoenig on drums. A fine piano trio demands much these days from its bassists and drummers, and this trio is no exception. We get a sensitive and evolved way of building foundations and launching outwards from them with this rhythm section.

But especially worthy of your ears is the finely wrought, complete pianism of Kenny. He sounds better than ever here, with some excellent compositional springboards (and a jazz standard or two), a finely honed, brilliant harmonic-melodic way about him and a beautiful sense of touch.

He asserts in this set his supremacy in the changes-centered realm of jazz piano artistry, both as fine and innovative a player as you will hear today in this zone and a way about him that will bring joy to those open to pianistic excellence. This for sure is one of his finest albums. The mature Kenny Werner is something to hear, a master of the idiom, greatly swinging as well as finely subtle.

Thanks Kenny for giving us this music! Very much recommended.