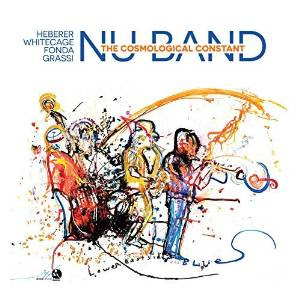 Nu Band is a significant gathering of contemporary avant jazzmen, an all-star lineup, who dedicate their recent album The Cosmological Constant (Not Two 923-2) to the memory of Roy Campbell, a close musical associate and former band member who was taken from us so sadly and unexpectedly a few years ago. If I am not mistaken yesterday would have been Roy's 63rd birthday, so this posting is timely, though of course the NY jazz community's anguish over his loss does not diminish via such anniversaries.

Nu Band carries on with a fine set of originals and some first-rate avant improvisations. The current lineup features the cornet of Thomas Heberer (who also celebrated a birthday recently), the alto sax and clarinet of Mark Whitecage, the bass of Joe Fonda and the drums of Lou Grassi.

These four of course are seasoned masters who show us that their creative powers are anything but diminished with the passage of time. On the contrary. The originals serve to identify the band and set up their solowork. Heberer contributes two, Fonda three, Whitecage one and Grassi three. They stand out as very worthy fare and very conducive performance platforms.

All four players get equal billing, which fits with the high artistry of each and makes this a cooperative venture in the best sense. Each is an important force, an innovator on his respective instrument(s), and we hear that fully on this set. The solo routines give space to all four players in varying combinations.

Grassi and Fonda, as one might expect, are more than a rhythm section--they are equally articulate melodists with the frontline so that the distinction between the two often enough becomes moot. But when they elect to swing ahead in rhythmic fashion they do so with impact and authority.

Heberer and Whitecage work wonderfully well in tandem as well as via their solo selves. Everybody has an original leg-up on post-bop avant line rendering and as you might expect the hearing is a revelation as well as a solid gas.

There are no dull moments to this music--and that's as you would expect with such a gathering. It's a very fine example of a great band carrying on with subtlety and fire. Roy would have appreciated the tribute. We all can appreciate the here and now of the music on this excellent set!