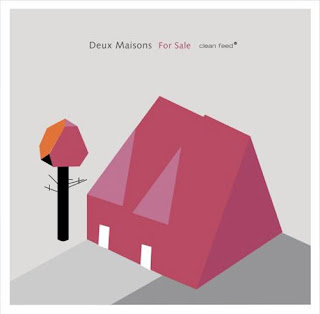 Catching up on some worthy music today, namely the very focused avant quartet known as Deux Maisons and their album For Sale (Clean Feed 320). If you have been following my posts and the Euro-Free-New-Music scene in general you may well recognize some or all of the names: Luis Vicente on trumpet, Theo Ceccaldi on violin and viola, Valentin Ceccaldi on cello and Marco Franco on drums.

The album features six collective improvisations that have both jazz and avant concert elements, which is a growing amalgam among recent and edgy European improv ensembles.

What struck me on first listen and thereafter is the way the two Ceccaldi strings form a sort of mini-string-section in contrast to Vicente's trumpet and Franco's drums. They come across in many ways as a kind of threefold timbral sound interaction. But not of course in any old way, given the caliber of the artists and their clear directional thrust.

The music runs a sort of idiomatic gamut, with all four artists interacting rather exceptionally well, setting up spontaneous counterpoint in inventive ways, each showing a set of original approaches to the instruments they have mastered, and ultimately achieving a lucid four-voiced music that is a good deal more than four-in-one, more one-from-four, if that makes sense.

Franco makes excellent use of varied parts of his total kit to create nicely phrased washes of sound that set the scene for the bowed-plucked-muted-open interactions of the three melody instruments.

It is one of those sessions where everyone has a determined confidence each in the other to create significance and they go boldly where they may, with true success.

For Sale is something I might put on for someone who wanted to hear the state-of-the-art today in chamber free improv. It convinces and intrigues!

Highly recommended. One of the best examples of high-avant spontaneous music today!